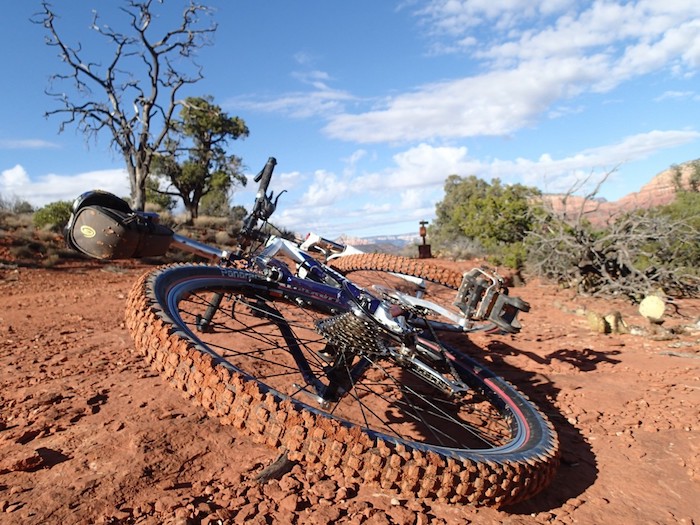 A real road bike is built for speed. For this reason, manufacturers take great care in decreasing weight for the serious cyclist. From lightweight carbon fiber frames down to tire design and featherweight wheels, road bikes have a certain “finesse” that other bikes do not possess.

So this begs the question, is it safe to ride your road bike, the one you scrimped and saved months or even years for, off-road? It may be best to answer this question with another one:

Would you drive a $15 million race car off-road? The answer is, absolutely not! Neither would you want to ride your high-performance road bike down a mountain trail, sending jarring shock waves through every component.

There are, however, solutions for those who, on occasion, need to ride on something other than smooth pavement. We’ll get to those later.

For now, let’s explore the reasons why you should never take your beautiful racing machine off-road.

1. The tires are built for speed on paved surfaces

Tire manufacturers design their road bike tires not only with decreased weight in mind but also with a reduction in road friction. Designers refer to the portion of a bikes tire contacting the road surface as the contact patch.

The higher the contact patch, the greater the resistance caused by the tire hitting the pavement, and a higher resistance means more work for the cyclist. The best way to combat this effect is to choose a narrower tire.

The obvious problem for using narrow tires on a dirt road is the lack of stability. Wider tires with a higher contact patch are much better suited for this task, which completely defeats the purpose of having a fast bike!

2. The lightweight rims may not hold up

Another problem with riding outside the confines of pavement is dealing with bent rims. Even if you have a chance to avoid replacement and true up your wheels, the time investment, aggravation, and costs still could be significant in the long run.

A slightly heavier, wider rim is much more suitable for taking on the challenges of rough terrain. But again, speed is severely reduced, and that defeats the purpose of owning a road bike.

3. The frame may not be suitable for off-roading

Carbon frames have indeed become stronger over the years. Studies show they hold up better in some cases than T1 alloys. With that said, bike manufacturers are experimenting with passive frame suspension technology.

Instead of utilizing spring-like active suspension systems, the carbon material itself is manipulated to act as a shock absorber for the entire bike. A passive system requires no moving parts since the carbon is shot through thinner, flatter shaped tubes. The result is better shock absorption and a smoother, more comfortable, and faster ride for the cyclist.

Unfortunately, it is unclear what effect carbon material manipulation can have on sustained strength characteristics. There has been little research conducted to show whether or not this new technology will hold up to continuous use over time.

4. Rim-brake enthusiasts may have a disadvantage on dirt

Some competitive road cyclists believe that there are weight and aerodynamic advantages with rim brakes over disc brakes, and conventional wisdom would suggest that they are correct in their assumption. However, the disadvantages can outway the benefits when going off-road.

Disc brakes can work better on trails and rugged surfaces, since braking is smoother, and it requires the rider to apply less pressure to slow the bike down on a steep incline.

But the same problem applies here as with other component substitutions. You are trading a piece of your bike designed for speed with another designed for strength, and it could ultimately alter your performance.

Bike components have had their share of recent innovations in technology over the last few years. Of course, not only does this come at a higher dollar cost, but it may also require the cyclist to handle all of this fine-tuned machinery with extra care.

Recently, a leading manufacturer of high-performance rear derailleurs wrote this warning in one of their technical manuals:

“Handle the products carefully, and avoid subjecting them to any strong shocks.” This warning probably means refraining from flying down a mountain trail hitting large rocks and tree roots along the way.

Other fragile parts of the bike are just as susceptible to off-road damage as derailleurs. Wheel pulley systems, brake rotors, and even cranksets and chainrings are at risk from excess vibration due to a bone-jarring ride on a rugged country road.

A standard solution that usually does not solve anything

One of the most common remedies for riders wanting to take their road bikes off-road is to switch to a wider tire. A wider rim would also be necessary in this case. The combination of a wider rim and tire together may improve handling on dirt surfaces, since the contact patch is wider than on a narrower tire.

However, wider tires may be of no help at all when running on rougher surfaces found on mountain trails. For this reason, most mountain bikes come equipped with tires that are not only wide but have knobs for better traction, handling, and grip. Then again, throwing wide, knobby tires on a road bike completely defeats the purpose of why anyone would want to buy a road bike in the first place!

By the time you get through changing out your wheels, tires, brakes, and other components for heavier duty ones, that road bike you fell in love with becomes unrecognizable. You no longer own a sleek racing machine capable of propelling you forward on the roadways at top speeds with the wind rushing at you. Instead, you have created Frankenstein’s monster!

Anyone who owns a Porsche will tell you it would be insane to go off-roading in such a refined sports car. If the owner of the Porsche also happened to be an off-road fanatic, they would probably go out and purchase a Jeep Wrangler or some other similar vehicle more suited for rough terrain.

The same principle can be applied to owning a road bike. Instead of riding it to a slow death on a rough country road full of potholes, you could purchase another bike that you don’t mind beating up a little.

It does not necessarily mean running out and purchasing a brand new bike. A used one would do just fine, as long as your road bike becomes the priority concerning upkeep and maintenance. But what type of bike would be suitable as a second-stringer?

A cross between a road bike and a mountain bike, the hybrid could be an excellent transportation resource for commuting to work, taking a shortcut on a dirt road, or just enjoying nature without having to worry about beating up your expensive road racer.

A hybrid bike is a cross between a road bike and a mountain bike. Its primary function is for casual riding and offers more comfort than a typical road bike. However, it is still able to tackle tough terrain and high-mileage treks.

Many features give a hybrid bike added comfort while riding:

Most hybrids are made from aluminum, but other materials such as steel and carbon fiber are also commonly used. As expected, the most expensive option for your hybrid’s frame is carbon fiber.

How much does a hybrid cost?

As with any bike, you get what you pay for. Upgrades to any of the major components will add to the cost.

The idea here is to use your hybrid as a second bike, so throwing a lot of money into it may not be the best strategy. It is probably better, at this point, to invest more heavily in upgrading your road bike.

With that said, small investments in mudguards, panniers, or recessed cleats may make your hybrid bike even more versatile, adding value to your purchase.

Expect to pay anywhere from $400 for an economy-oriented hybrid up to several thousand dollars for a precision-crafted bike. Again, since you are using your hybrid as a workhorse to save wear and tear on your valuable road bike, there would be no shame in purchasing that second bike used.