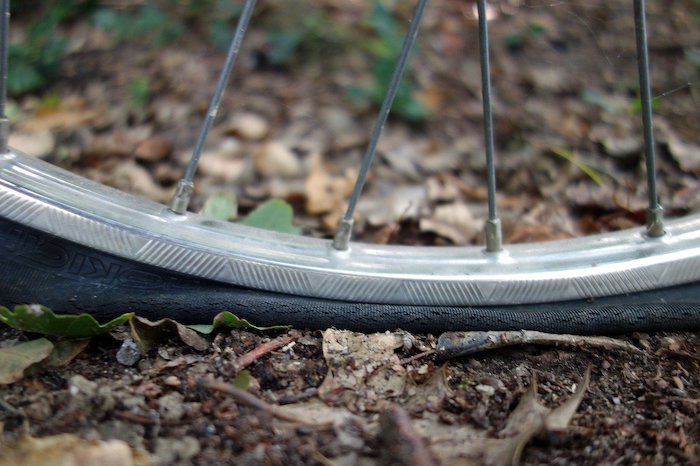 Whether you have ridden a bicycle yourself or you routinely watch others ride, everyone has at least seen someone try to ride a bike with an under-inflated or even flat, tire.  Why does that happen? Why is a bicycle difficult to ride when all or some of the bike tire’s air leaks out?

Basic physics will explain this, to a degree. When you’re riding the bike with a properly inflated tire, the air pressure inside the tire is reducing the normal force to the center of the tire. As a tire loses air, that air pressure is far less and it is spread to a wider amount of tire tread, which increases the friction between the tire and the road it’s on.

When you increase the friction between the bike and the road, it becomes much harder for the bike to move forward. (It would also be more difficult to move backward, but few move backward on a bicycle, so we’ll forget about that for now.)

As the tire loses air, it becomes somewhat deformed, which has a negative effect on the tire’s movement. By changing the form of the tire, you change its movement. That means the energy you normally have to expend to make the bike move is no longer sufficient to move the bike is less efficient and effective.

That’s because the friction the tires have to overcome to move forward often becomes impossible to meet. You are always better off with a bicycle having two fully inflated tires.

How Do I Avoid Flat Tires?

Thankfully, in the current climate, in which technology in everything is expanding by leaps and bounds, even the bicycle, an 18th Century technology, can keep you keep up in the 21st Century. Therefore, if you can ride with care and common sense, you can almost always avoid getting a flat tire.

And, even if you still get a flat tire once in a while, you can usually repair it in just a few minutes. In this article, we hope to show you how to avoid flats, as well as how to fix them quickly in a pinch. Here’s hoping you never again have to ride a bike with a deflated or flat tire ever again.

Pneumatic tires are made of a very tough and resilient fabric that is covered with rubber. When you fill the tire with the recommended amount of air. The fabric will become increasingly tense and firm against the road. Because a pneumatic tire is essentially hollow, it can be filled with air almost all the way to the edge of the rim without damage.

Of course, because tires are not actually airtight, the tire uses an inner tube, which works like a round balloon. The inner tube has a valve that allows the bicyclist or bike repair specialist to inflate the tube.

In this technologically advanced era, bikes are starting to be fitted with tubeless tires, which means the tires themselves have to be airtight, which brings with it complications, especially given that bikes have spoked wheels.

Be Careful Where and How You Ride

A few flat tires are unavoidable, but most of them are very easy to avoid by watching the road in front of you. If you keep an eye out for hazards in the road with an eye to riding around them, or even hopping over them. If you’re riding in a group, you should also point to hazards, so they can avoid them, as well.

Some folks seem to have a knack for running over hazards and putting holes in their times, but most have the same thing in common; a tendency to ride in street gutters instead f the travel lanes of the road they’re on.

Riding in travel lanes means driving on the part of the riad that is usually free of broken glass, nails and other dangerous objects that usually get put there by the vehicles in the travel lanes. Those cyclists who habitually ride next to the curb are giving in to their irrational fears, and they’re actually creating an even bigger threat.

Not all bike tires will develop a slow leak that can perhaps get through before the bike gets too difficult to ride. Many times, they blow out, which can create an even greater chance of ending up in the middle of traffic. In addition, loss of air in the tire or a bump into the curb can lead to a loss of control of your bike.

Any bicyclist can avoid the inconvenience and the potential danger of a flat tire by simply buying good equipment – especially the inner tube – and then combine that with riding techniques based more on common sense and less on fears that are basically irrational.

When Your Bike’s Tire Starts to Leak, Act!

Part of being observant while riding includes keeping an eye on the physical condition of the bike you’re riding. A tire that’s a little bit soft becomes flat relatively quickly, so it’s best to keep an eye on the tires and start pumping it up while it’s just lost a little air.

If you wait until the tire bottoms out with every bump in the road, you may be too late, when a bump seems hard on the bicycle and you, it’s time to stop and add some air. By the time your tire is bottoming out with every bump, yoou are probably already damaging the wheel itself.

If you regularly look down at your front wheel, there is a good chance you will notice when it gets a little soft. Or, at the very least, you may notice that your bike gets a little wobbly when going around corners. That can give you a big hint, so you can stop and top off the air before it gets bad enough to do damage.

See Also:
Can You Use A Presta Tube On A Schrader Rim?
Can I Use A Smaller Bike Inner Tube Than I Am Supposed To?
Do Mountain Bikes Need Shocks?